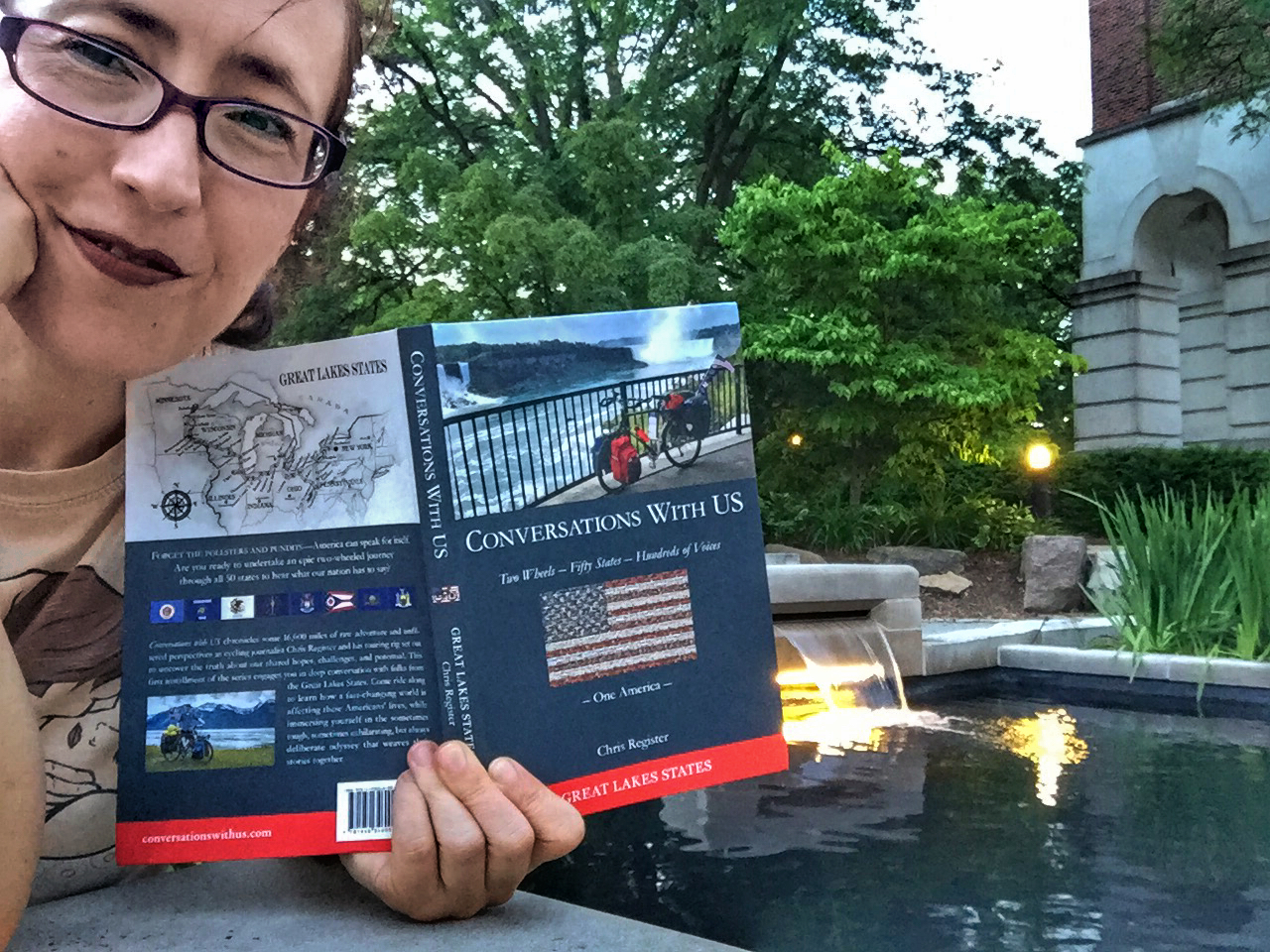 Do you know what book darts are? Book darts are flat, paper-thin metal line markers. Fastidious types will appreciate the ability to mark a page in a book—or even a specific line—without resorting to highlighting, underlining, or dog-earing the page. And unlike sticky notes or sticky flags, you don’t have to worry about glue drying out and the post-it falling off. Book darts slip onto the page, but unlike paper clips, book darts are thin enough not to leave an impression on the paper, even if kept in a closed, heavy book for a long time. The label on the tin asserts that book darts will not stain pages either.

Why am I blathering on about book darts? Well, when I started reading Conversations With US: Great Lakes States, I kept my tin of book darts at hand so I could mark any bits that I found noteworthy or delightful and might want to quote in a review. Reader, I emptied the tin. There are well over two dozen book darts deployed through my copy of this 258-page book; I really liked it.

Author Chris Register found himself disturbed by the vision of the United States he encountered on the evening news and on social media. He decided that seeing the country from the saddle of his black, steel-frame, 27-speed Surly Long Haul Trucker loaded down with about 100 pounds of gear was the way he wanted to investigate the state of the union. He committed to a series of solo bike tours through our nation. From July until September of 2015, Register rolled through the Great Lakes States: Minnesota, Wisconsin, Illinois, Indiana, Michigan, Ohio, Pennsylvania, and New York. Along the way, he sat down with folks from all walks of life and asked them about their lives and their views of America: what changes they had seen, whether they thought they had good opportunities, what values they would say define us as a nation, and so on. These interviews form the heart of the book.

When Register stopped at the Tipsy Turtle Bar and Grill in Minnesota to break up a dull afternoon of riding, the cheery proprietor described growing up on a nearby Dakota Sioux reservation where he enjoyed a childhood filled with so much hunting, fishing, and catching turtles that it felt idyllic even though he turned nine years old before he lived in a home with electricity. Less idyllic was the reason the cheery man didn’t speak a word of the Dakota Sioux tongue.

“My mother had been sent to boarding school where they wouldn’t let ‘em speak Native, you know, and all my aunts and everyone went, too. At that time if they spoke Native they were punished. It was completely frowned on.”

I confess that early on, I suspected that I wouldn’t love this book. Unlike the interview at the Tipsy Turtle, many of Register’s subjects were older white folks who fixated on the superior values of earlier generations and blamed modern problems on women having multiple children out of wedlock or on the complacency of the poor who, according to an otherwise pleasant-sounding Wisconsinite named Sue, “don’t have to do anything for their free money.”

I should have trusted the author. Register counterbalanced the Sues of the Great Lakes region with interviewees like Ernie Broadnax, a resident of Elgin, Illinois, whose family has lived in Elgin since his great-great-grandmother was brought there with other blacks as “contraband property” out of slavery in Tennessee by a Union colonel with help from the white First Baptist Church in Elgin. Ernie described sitting on the school bus in his youth after basketball games and speech tournaments when he wasn’t allowed to eat with the rest of the team inside a restaurant.

Register observed, “Sitting in front of a man who himself had been forced to wait outside a restaurant because he was black stirred feelings of shame and anger inside of me that even the best PBS specials had never tapped into.”

Despite personal history that would embitter some, Ernie still espoused hopeful ideas about how to improve the outlook for today’s young black people in his neighborhood.

So many interviews took unexpected detours: a Chicago hardware store proprietor with a basement that survived the Great Chicago Fire, a former teacher turned state park employee in Indiana who pointed out that school vouchers don’t help poor families pay for gas or time to take children to distant schools, Miss America 1963 who reflected that young girls are better off on a playground getting dirty than on a pageant stage, and more.

The book’s organization makes it easy to dip in and out. It’s a day by day account covering the riding, with notes on each day’s interesting sights, accommodations, and interviews. Register’s daily mileage was relatively low, making a cyclotouring trip like his seem attainable to riders who might not think of themselves as “athletes.” He described experiences that will resonate with cyclists.

Several miles of pedaling under a blazing sun brought me to a sloped gravel drive with a red barn at the top—the retail front of the Sassy Cow Creamery. The rush of cool air greeting me when I opened the door answered half the secular prayer I had repeated a dozen times before arriving. The other half was fulfilled a moment later when the young women who had taken my call met me at the counter and offered an ice-cream cone of any flavor I wanted (cookie dough, obviously). Being already sweaty, gritty, and (presumably) smelly, I fought extra hard to keep the treat from running down my fingers while waiting to speak with Sassy Cow’s owner. My foothold on a professional presentation was tenuous enough.

In this book, you will see part of the country already familiar to you through new eyes, as when the author marvels at the sight of the wind rippling through the bean fields in a wave. You will almost certainly encounter views in this book that do not align with your own. I did. And yet, I feel like it’s a valuable thing to learn about the diverse views and experiences of our countrymen and to make some effort to understand them. Now, I do wish that “diverse” included more people of color among the book’s interviews, but since it sounds like an element of serendipity was involved in arranging many of the interviews, I hesitate to fault the author. I hope for even greater diversity in forthcoming editions covering other swathes of the country. I will certainly be interested in reading the author’s next book, due out this fall, covering his bike tour through the American Southwest. Meanwhile, if you read Conversations With US: Great Lakes States, I would love to hear your thoughts on it! Maybe we could discuss it on a Wabash River Cycle Club ride.

Written by Administrator on Sunday July 7, 2019

« Book Review: The Valley of Heaven and Hell: Cycling in the Shadow of Marie Antoinette by Susie Kelly - The Blue Ridge Parkway: Fancy Gap to Front Royal in 6 days with Adventure Cycling »