Book Review: The Valley of Heaven and Hell: Cycling in the Shadow of Marie Antoinette by Susie Kelly 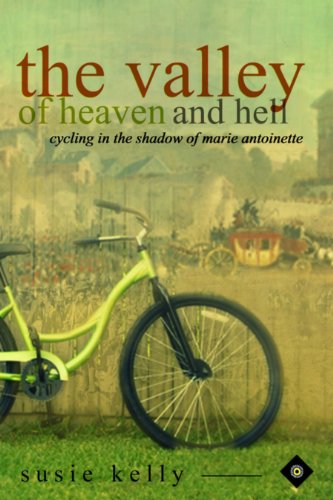 Susie Kelly and her husband decide to travel a route that roughly duplicates the one taken by Marie Antoinette and King Louis XVI on their ill-fated attempt to escape the French Revolution. Since Susie recalls even childhood cycling in the most disagreeable terms and has only had aches and pains increase in the years since childhood, she undertakes the journey on an e-bike. Despite the boost of a motor, her husband, Terry, consistently outpaces her. Avid cyclists may be picturing Terry as a MAMIL (middle-aged man in Lycra) on a fancy carbon road bike, but Susie describes his bike as an aluminum mountain bike. Susie feels forced to pedal past sites of interest when Terry forgets to stop and she can’t catch up to him. The fear she feels operating in busy traffic whilst concentrating on Terry’s bright red panniers far ahead of her is palpable. Even at times when her husband makes an effort to slow down and converse with her, she finds herself too winded to do more than mutter a few words in response to his commentary.

It’s not just the physical effort of cycling that Susie dislikes. She gets sunburned. Her feet swell. She blames the constant breeze for watering eyes that eventually turn into a bad case of conjunctivitis. When the weather is cold and wet, the shower facilities at the campgrounds seem to only have cold water. On the first day of hot weather, Susie finds herself looking forward to a cold shower when they stop. Predictably, the couple camps at a facility where there is only hot water with no temperature control in the shower. Too many meals on the trip involve pizza. And when they do stop at a famous restaurant, Susie must change in a cloakroom from sweaty spandex to the one skirt she brought on the journey, and she feels far less elegant than she would like to be for the occasion.

As I stood quietly dripping onto the carpet, the receptionist looked at me with a mixture
of wonderment and horror. The cloakroom was roughly the same size as a telephone
cabin. After I had writhed out of the clinging wet clothes like a python sloughing its
skin, and changed into my chiffon skirt, blouse and gold moccasins, the reflection in the
mirror was no different except for the costume and the fact that my face was even
redder after my cramped exertions.

Perhaps some of Susie’s complaints are played up a bit for humorous effect. Her anecdotes, even when they are self-deprecating, lack warmth. Susie may tell us that she and Terry quit grouching at each other after a bite of lunch, but we don’t see them sharing many happy moments.

The parts of the book that recount scenes from the end of Marie Antoinette’s life as well as Susie’s visceral response to locations the deposed royals visited, are more successful. Nonetheless, the history Susie relates is fairly superficial. A section with recommendations for further reading has titles that may be more satisfying to readers interested in Marie Antoinette. Cyclists may read this book as something of a cautionary tale. It’s almost a blueprint for how NOT to interest your spouse in cycling! Susie Kelly has written several books since this one came out. Unsurprisingly, none of them document two-wheeled adventures.