Fancy Gap to Front Royal in 6 days with Adventure Cycling

This is an account of a trip I went on with Andy Hirsch to ride the Blue Ridge Parkway and Skyline Drive in Virginia in early June.  The group met on Saturday June 1st at Fancy Gap, Virginia, just off the Blue Ridge Parkway.  I was surprised to see so many people:  5 guides (one a bike mechanic), 2 cooks, and 20 cyclists, all of whom were ready to go. 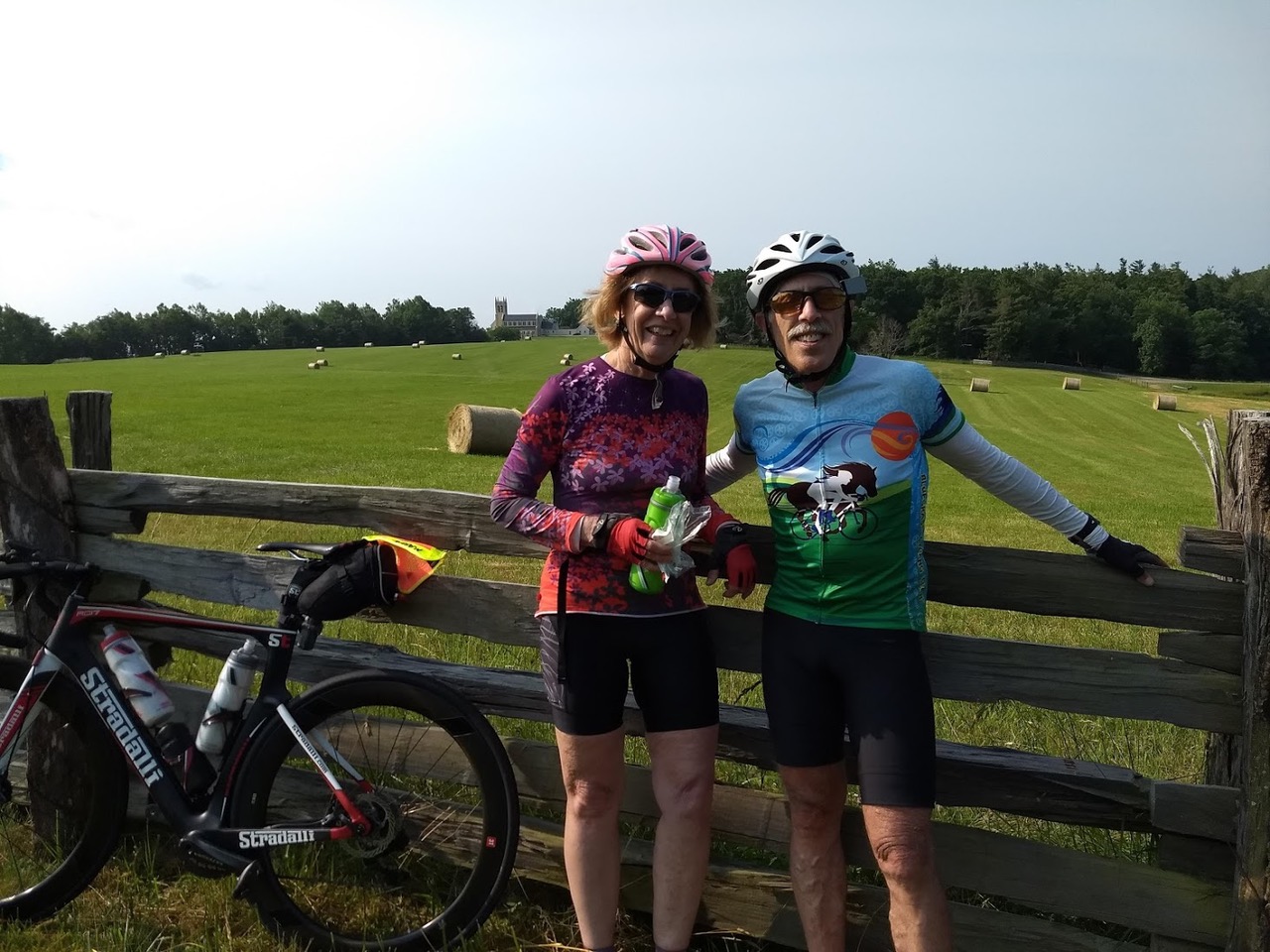 Sunday morning we got on the road bright and early (that’d be about 7:20 or so), with a glimpse off to the west of smoky blue ridges coming up right away.  Whoah!  Some great vistas to be had!  The first day wasn’t too bad, 44 miles to Floyd, VA with a transit through Meadows of Dan and Mabry Mill (a lovely site, everybody took photos there).  Lots of birds singing in the trees, tranquility reigned.  The descent into our lunch spot scared me a bit, because of cross winds that made my bike shake.  I knew ahead of time I’d be more worried about my ability to descend than climb, and that was pretty much true.  A highlight was a trip into Floyd for some ice cream and bluegrass music at the General Store—we saw a great group of 4 or 5 musicians playing pick up band style.

Monday we meandered back to the BRP from our campground (a hilly grass amphitheatre that’s used for music performances now and then), and again started with mellow riding.  Right before our water stop at mile 18 we stopped to admire a very cool Benedictine Abbey, several hundred yards back from the road in a setting of neatly cut pastures.  There was a 2 or 3 mile climb somewhere along the way that I remarked on—the guides must’ve been thinking, “this woman’s in for trouble, she’ll faint when she sees the really long climbs that’re coming up.”  Most everybody handled the climbing just fine, but we all found out what we could handle in our easiest gear.  Had to.  Repeatedly.  Another beautiful day, and there were some places where we could see off to both sides of the ridge at the same time (but very mellow, no precipices).  We tromped up (on bikes) a side excursion to the Mill Mountain Star Overlook, which afforded a great view of Roanoke, a thousand feet below in the Shenandoah Valley.  This was my favorite campsite even though we had to bus into Roanoke for showers (and ice cream), because we pitched tents on a grassy knoll overlooking ridges off to the west, and got to savor a lovely sunset. It’s called Box Tree Lodge.  About 5 of us did some yoga before the sun set too. 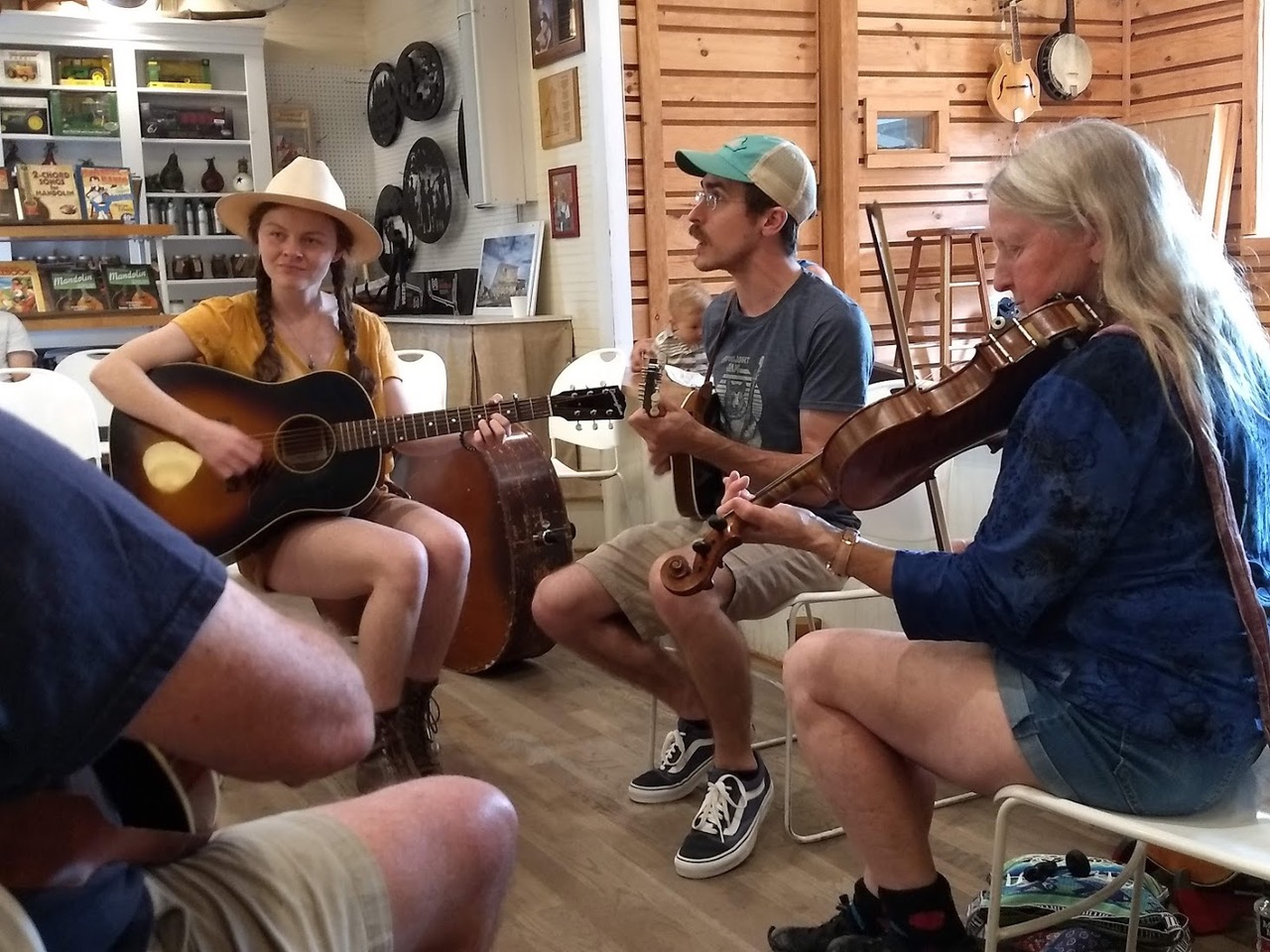 Tuesday was showtime in terms of being a demanding day of riding.  We got back on the Parkway after breakfast, and we climbed from about 1000’ to about 2,500’ in the first 15 miles or so, a nice warmup.  Then the hills rolled for a while, meaning we got some downhills to spell us from the climbing.  From mile 30 to mile 40, we climbed from 2700’ to 4000’, not in huge horrible chunks, but in grinding, grit your teeth and get ‘er done style.  Once we got up to Apple Orchard Mountain at 4000’ (after 1,500’ of climbing in 6.5 miles), we had 12 miles of descent to the James River, at a mere 600’.  I felt really unprepared for this, and had the solitude of my own company on the way down.  I stopped about 7 miles down to rest, not because I was out of breath, but just to unjangle a bit.  My muscles on the insides of my forearms twinged from all the feathering I was doing, trying to control my speed all the way down.  In truth, I’m a chicken shit descender, and I think this was the longest descent I’d ever done.  I felt like a little kid who’s been thrown in the deep end and told with a smile, “now swim!”  The really great thing is there was almost no traffic coming down---I got passed by a bike or 2, but not by cars!  That made it much nicer than prior experiences I’ve had doing long descents in Utah and Colorado, where descents were shorter and steeper, and I had to share the road with car traffic.  We camped at the Lynchburg KOA, off of a busy logging road with big rigs hurtling past.  Our tents were next to a buggy pond, not the greatest setting of the trip.  But we had a lovely older gentleman play dulcimer and flute (and get us to play rhythm instruments too) after dinner, a very nice touch. 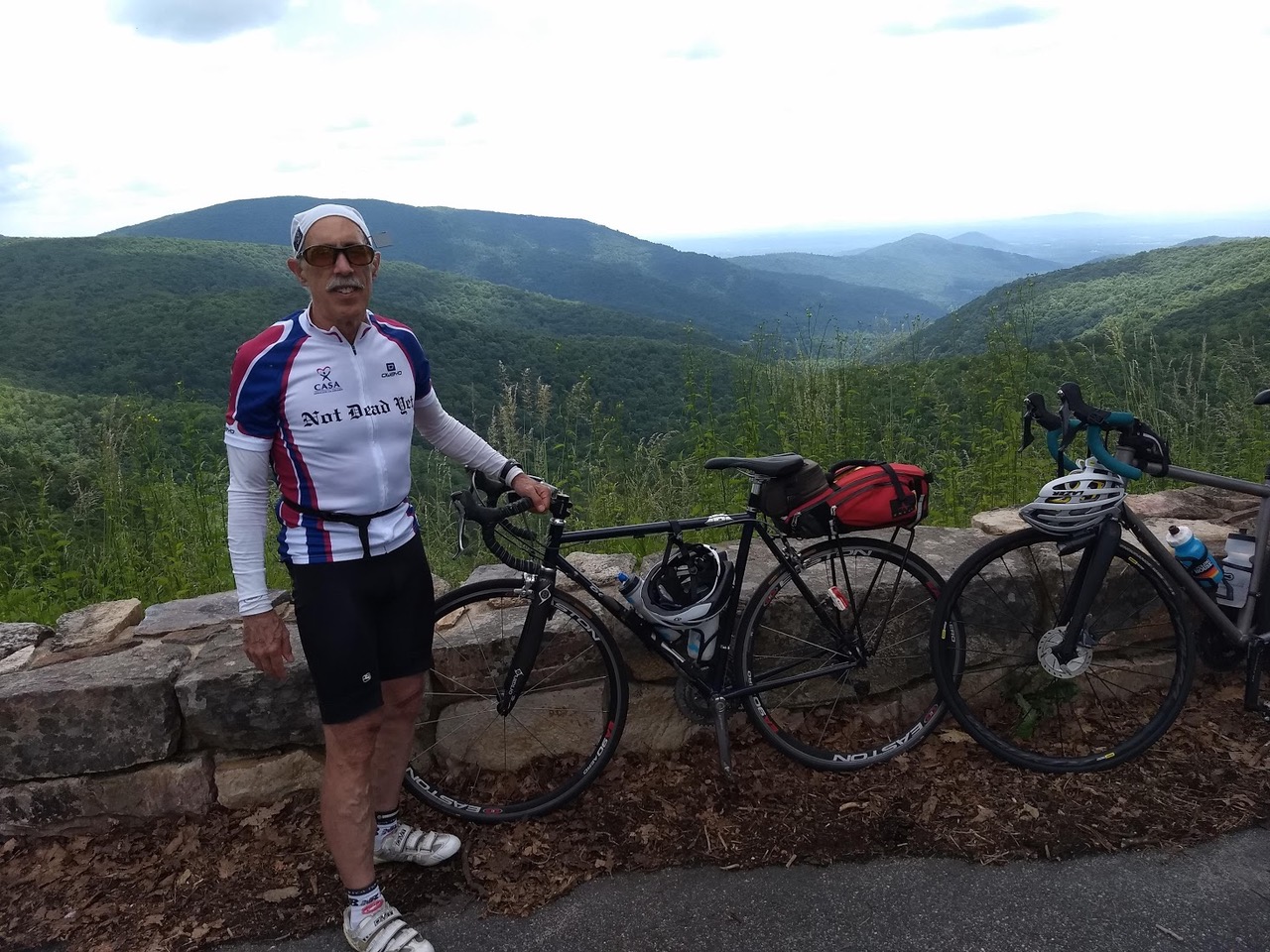 Wednesday was probably the day I found the hardest for riding, because I’d developed some saddle sores on my sit bones and elsewhere.  And we had a few relentless hills to climb, the kind where you put it in your lowest gear and grind for an hour at a time.  So I asked for advice about how to deal with the sores, borrowed some Chamois Butt’r from one of the guides, and toughed it out.  We enjoyed some great views of the Shenandoah Valley off to our left (west), and we rode 68 miles in all (our longest day on this tour).  Toward the end of the ride, it came on to rain, and we got drowned rat-wet, with the sores getting sorer and shoes filling up with water as we headed to the park in Waynesboro where we were to camp.  Ugh.  We opted for rooms in the motel the group was using that night--there were still some available for those who wimped out.  Best time to not put up a tent ever, and to savor a long hot shower and dry out my shoes.  Adventure Cycling schlepped all the motel folks back and forth to the campsite for meals. The whole thing made me happy. Waynesboro also marked the end of the Blue Ridge Parkway.

Thursday we started the last hundred miles of our trip on Skyline Drive.  Andy and I got an early start, and within 30 minutes of starting up Skyline Drive, we stopped dead in our tracks.  There was a bear crossing the road in front of us!  We took photos, and Andy got a video.  Very exciting, but I’m glad we saw him from 20 yards distance.  On this 60 mile day, elevations cavorted along mostly between 2500’ and 3300’, with plenty of ups and downs.  It didn’t feel as hard as the two preceding days of riding, and we ended up at Big Meadows campground (inside of Shenandoah National Park) around 2:30 or 3:00.  Most nights, those who were so inclined would have a beer or glass of wine before dinner, and chat.  But the national park doesn’t let people drink in the campgrounds.  This led many of us to check out the Big Meadows Lodge, which offered similar libations with an old fashioned Yosemite Village kind of ambience.  I haven’t mentioned the food, but it was consistently wonderful (this next to last night on the road we had Texas style chili served in a meadow under a big ten--but we had to watch not to leave food out unattended because of bears!). 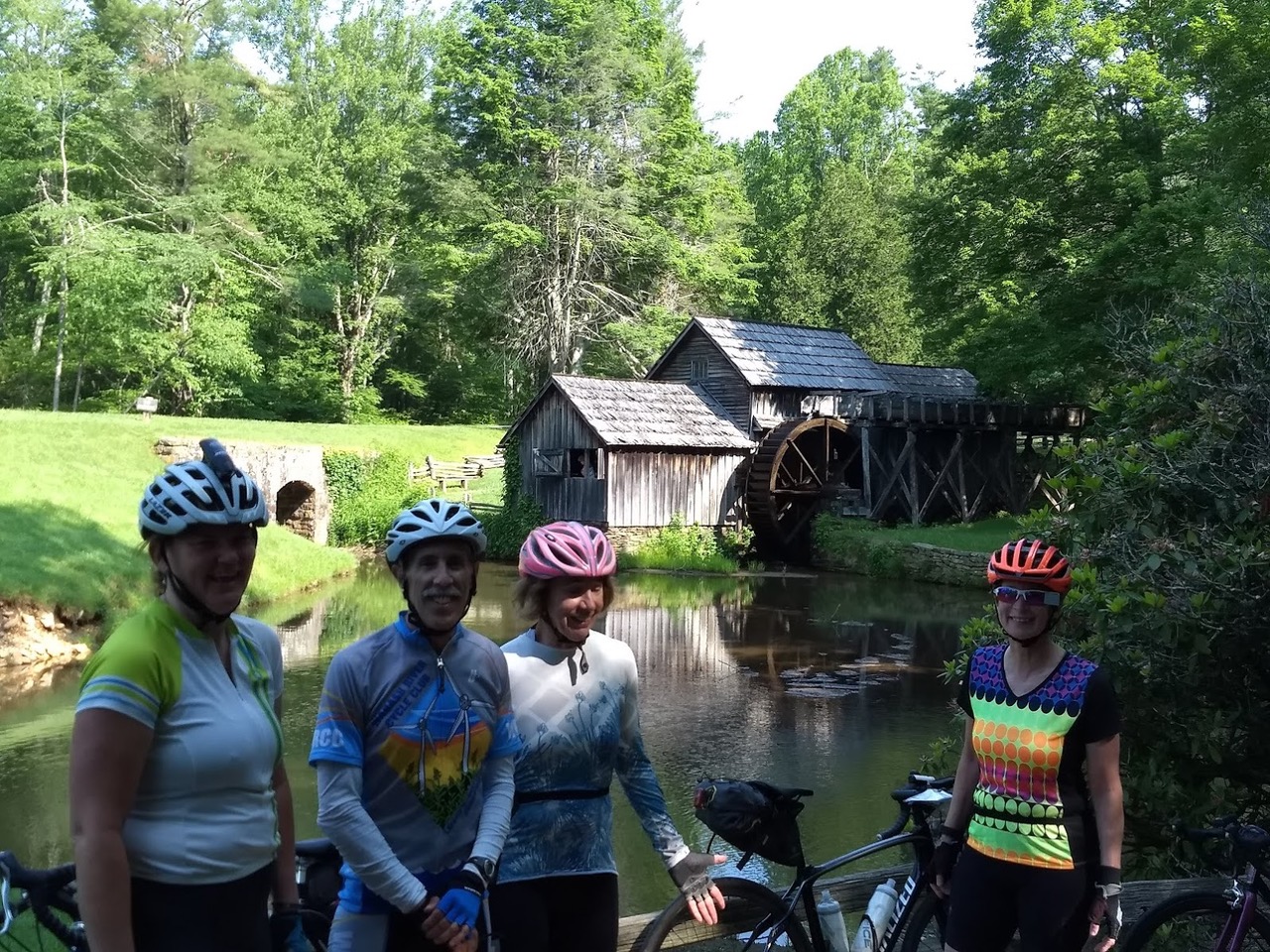 Friday was our last day of riding, and we headed out of Big Meadows toward Skyland, a resort that Andy wanted to pay homage to (he’d gone there as a kid, growing up in Baltimore).  Geno came with us, looking for a functional ATM, as everyone was wanting to give our guides and cooks a “thank you” tip for an excellent job of herding and encouraging and feeding us.  We saw this little resort through a veil of fog, which was quite dense and a little scary as we headed down through a string of curves that we couldn’t always see very well.  I was glad when the fog burned off an hour or so later—I worried about cars not being able to see us too.  We had more downhill than up this day, and finished Skyline Drive and headed for our campground in the early afternoon.  The last night’s campsite was called Skyline Ranch Resort, and it had a cute animal zoo with potbellied pigs, chickens, llamas, a pony, some horses, ducks, and a very inquisitive goat.  We were glad to get there but sorry the adventure was almost over.  Our last dinner had freshly steamed mussels and very tasty shrimp—excellent locally sourced food, again!  I was pleased to be given one of the little awards at the finale dinner (along with 3 or 4 others).  Mine was for being inquisitive and trying to learn more about effective techniques for descending!

The gentle contours of the Appalachians helped me gain confidence on downhills, though not to the point of going down without braking!  (Andy did that).  We had a great time, and mostly had terrific weather (thinking of how rainy it was here the first week in June, I pinch myself). We’re thinking of going on another Adventure Cycling trip next year, and betting that a lot of you would love such an experience.  Come join us!

Written by Administrator on Saturday July 27, 2019